We had purchased the Pearl Harbour passport ticket online several months previously. This entitled us to:

We had received advice that you need to get to the site early to have a chance to get on the boat for the Arizona Memorial. It is available on a first come first served basis. The site opens at 7:30 and we arrived around 8:30, before the coach tours. There were quite a few people already there, but parking was easy and we didn’t have to queue for anything, although it may be very different in peak season.

We had also read that only small ‘purse size’ bags would be allowed in. I had a small passport sized bag and this was not allowed in. So wear clothing with pockets, have good walking shoes and get there early! You can take water into the area and there are some water facilities where you can ‘top your bottle up’.

On arriving at the main ticket desk you need to get your Arizona Memorial tour ticket. Although this is included in your price, they are only available for limited numbers on a first come first served basis. We got our tickets and were taken into a theatre to watch a 20 minute film which set the scene and gave us the background to 7th December 1941 – the day Japan bombed Pearl Harbour. This film was excellent and answered some questions people may have had about why Japan had declared war on America, why Pearl Harbour and how under prepared the US were for the attack.

After the film, we boarded a boat to see the memorial, which was established in 1962 and was built as a covered platform over the sunken Arizona to act as a place of respect to honour those who died on the ship.

We couldn’t get off the boat onto the memorial as the landing structure has become unstable and is awaiting repair. Instead the boat circled around the memorial and we were able to see the few elements of the ship that can be seen above the water and also saw a small oil slick which is oil still leaking very slowly from the Arizona.

We were also taken on the boat to have views of the USS Missouri that we would see later in the morning.

The guide for the Arizona tour provided a human account of the affect of 7th December 1941. It was sad to hear of so many brothers who had died on the ship. 38 sets had died with only one set surviving. It was a moving experience and one which left me thinking ‘have we learned any lessons since then?’

After the Arizona we went onboard the submarine USS Bowfin for a very interesting audio tour. This sub was home to 246 sailors during World War ll.

It was very cramped on the submarine and one lady asked to get out quickly as she was struggling with claustrophobia. How the submariners stayed down there for weeks on end was beyond me.

From there we went on a shuttle bus to the USS Missouri which was where the official surrender of Japan and the ending of World War 2 took place. Present at this surrender were various Japanese and representatives from many Allied nations including Australia, France, New Zealand, UK and USA.

The ship had been built after Pearl Harbour to avenge the attack and to many it seemed appropriate that it was the setting for the official surrender.

The ship had many artefacts and memorabilia. The Kamikaze exhibition was very moving with letters on display from the pilots to their relatives prior to their last mission.

The Missouri continued to serve after the Second World War including the Korean and Persian Gulf wars. There were artefacts from these periods on board, the latter war seeming more pertinent in some ways as I personally remembered that.

After the Missouri there were other museums and artefacts we could have seen, but having spent 4 hours already, we felt we had seen enough. 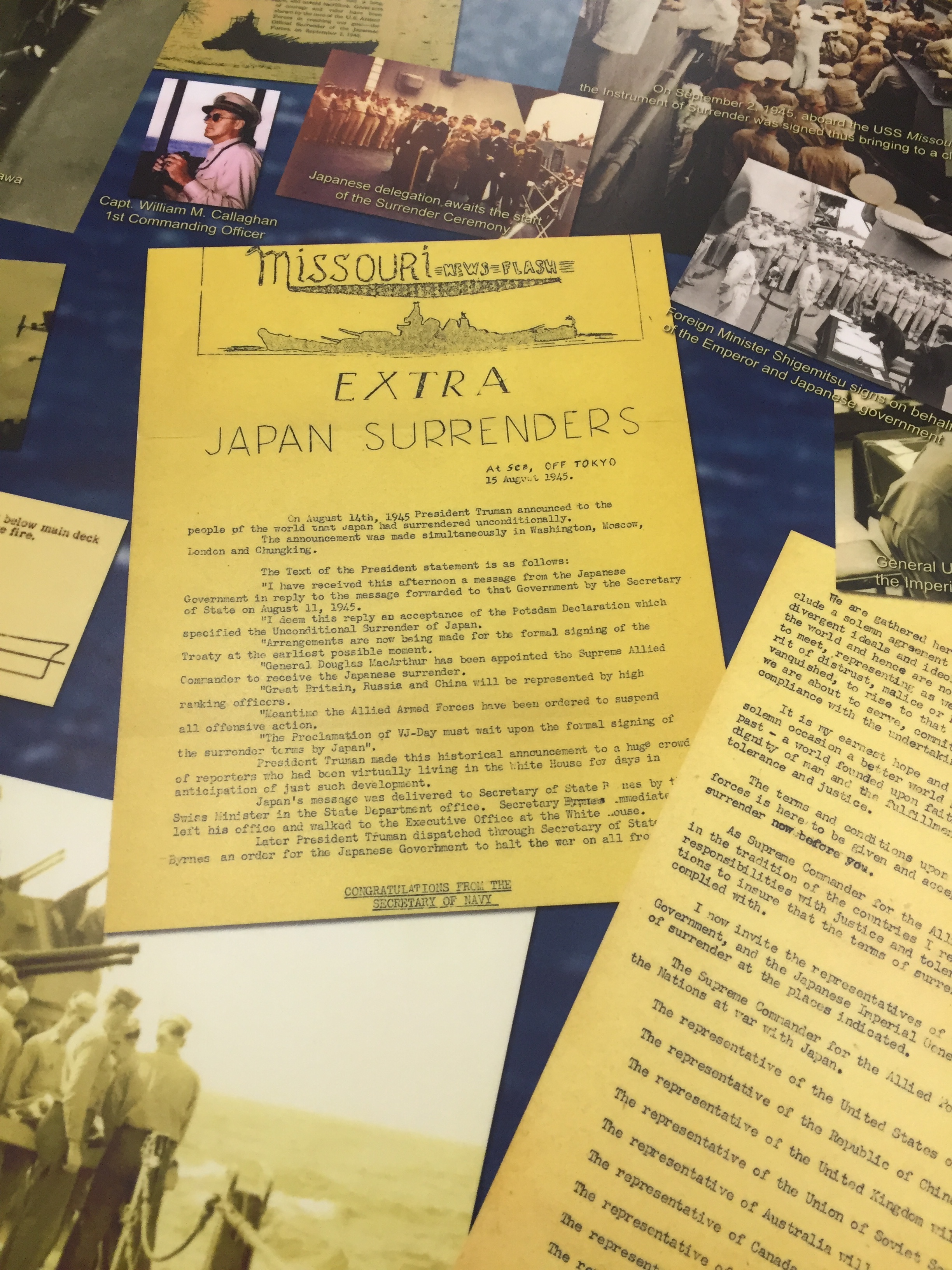 Pearl Harbour obviously means so much to America, although I felt one or two of their statements were a bit one sided. There seemed to be no real recognition of the allies who also fought in the Pacific region, or of the terrible devastation from the bombing of Hiroshima. However, we did not see every aspect of the museums so I may have missed this.

I was left thinking that all wars seem to be the same. Often started by a few, but leaving such a trail of devastation on so many and as a human race never seems to learn.

We left the sombre, thoughtful Pearl Harbour Memorial and made our way to check into our last hotel (Waikiki) on this long trip.

More on Waikiki in the next blog