After some domestic duties of making breakfast and using the laundry facilities at the cottage, we went off to see if we could see the turtles coming up onto the beach at Laniakea Beach. We had read that the ideal time to see the turtles is between 11am and 1pm. Unfortunately they weren’t there! When the larger winter tides start to roll in the turtles do not come into shore so much. One of the volunteers working for the Hono (Turtle) people told me that yesterday there were only two turtles came in to the beach and the previous two days none had come. She said to go off for an hour and come back, but we didn’t expect much!

So we went back to Haleiwa to do some sightseeing and shopping. There is a small marina or harbour there with a lot of surf shops and shacks. In the centre is a market place where some cockerel, hens and chicks were roaming around. We have seen a lot of chickens around the island, alongside the beaches or in car parks so this was not a surprise to see them here. 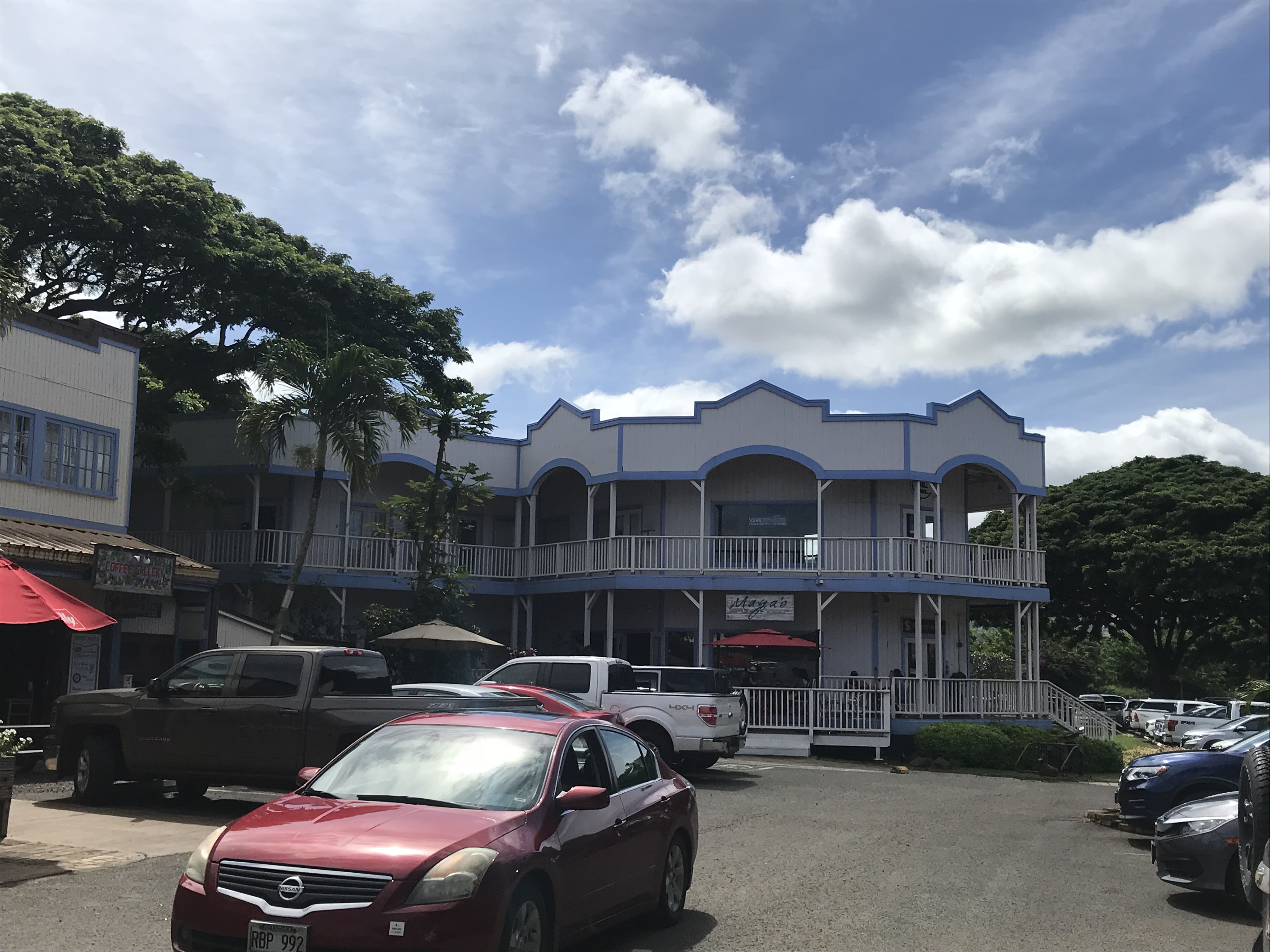 There are some nice shops and bars in Haleiwa. Shops catering for the surfing community, some small grocery stores and some better than usual tourist shops. My main observation in the tourist shops was that many of the items were made in the Philippines or China, which was a disappointment.

After a potter around Haleiwa we went back to see if the turtles had appeared, but alas no. They knew something we were about to discover – the surf was very rough!

So we went to Waimea Valley where a short trail takes you to a waterfall where you can swim in the open water. We thought the waterfalls will be good because of the earlier rains we had had this week. They were good, so good that swimming was not allowed! We decided not to spend $17 just to take the scenic walk to the waterfall if we could only look. We were not having much luck won our chosen activities today!

The north shore, where we were staying, is famous for world class surfing conditions and these are at their best – or most dangerous – during the winter months. Our visit was at the very start of the turn in conditions. So we decided to visit (to view and watch) the surfing beach area called Banzai Pipeline which is near Sunset Beach. This is where international surfers compete for major championships. The surf was very high and not somewhere an amateur in the start of the winter season would want to venture into. 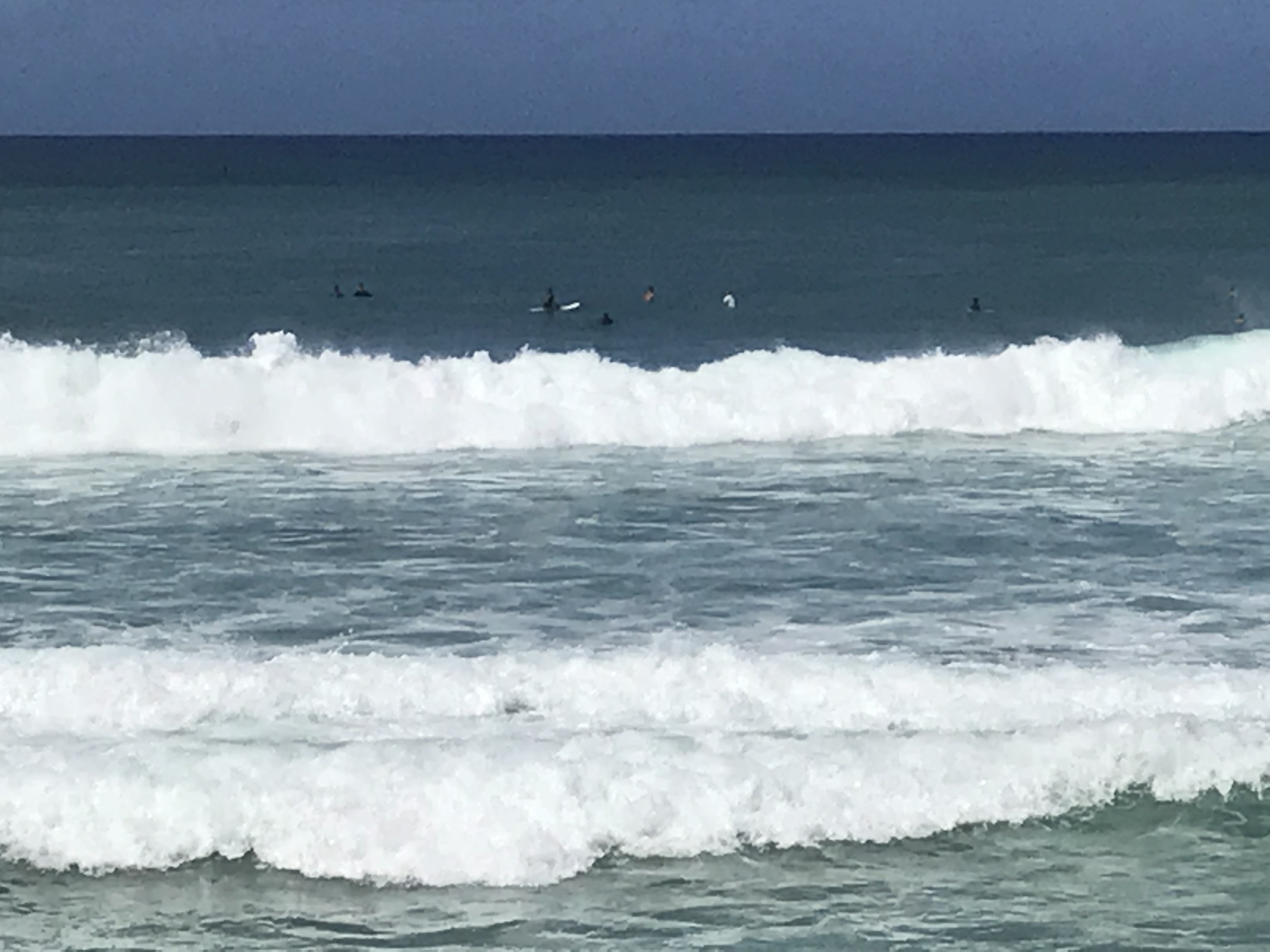 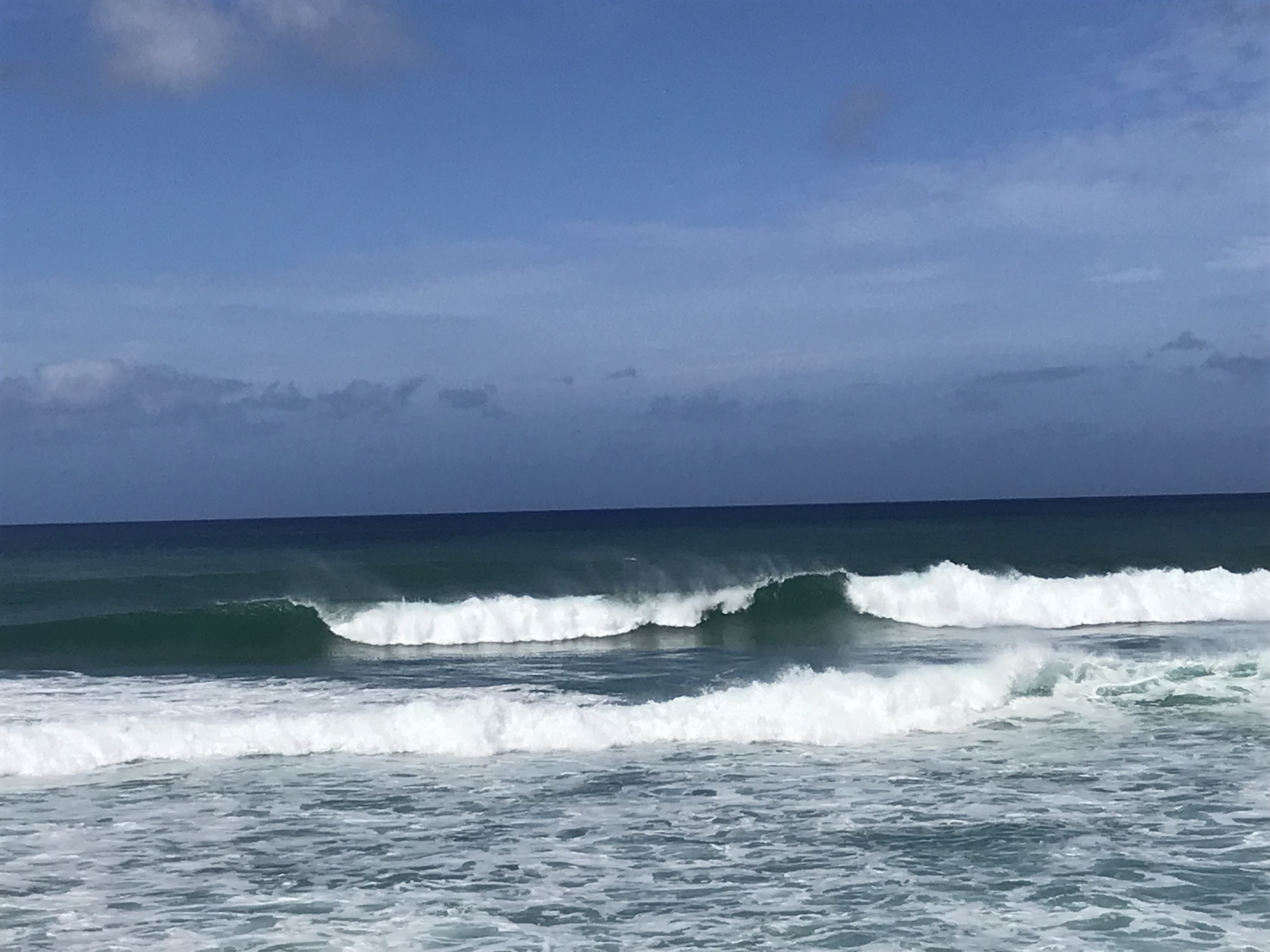 After watching in disbelief at the size of the waves, we moved onto our beach near Waimea Bay, called Pūpūkea Beach. This is 30 metres from the house we had rented.

The conditions there meant a much stronger sea than the previous days. Despite the surf breaking out amongst some rocks, when they came to shore they were still very strong. A local advised us to not go out beyond our depth, and to keep our feet on the bottom. We said we were not going out beyond the depth of our knees! The surf was so strong that it did knock most of us over even in that shallow level. As the surf rolled in near us some waves were as tall as me just a few feet out and we were only up to calf deep in water. I have never seen surf like it. Our son who used to live in Australia said these were bigger than he saw in Bondi Beach.

The sand in this area is a fine ‘gritty’ type sand, which is great to ‘brush’ off your towels but gets stuck in your hair and swimming costume! So I decided I would go back to the cottage and have a shower before lunch. I have noticed in the USA a lot of the state Beach parks do not have showers. Surfers take water in large containers to ‘hose’ themselves down afterwards, it’s a good idea as I do miss the beach showers we are so used to in Spain.

After lunch we went to Sharks Cove, we thought if the surf is that strong it would be good to watch the surf coming over the top of the rocks into the lagoon. 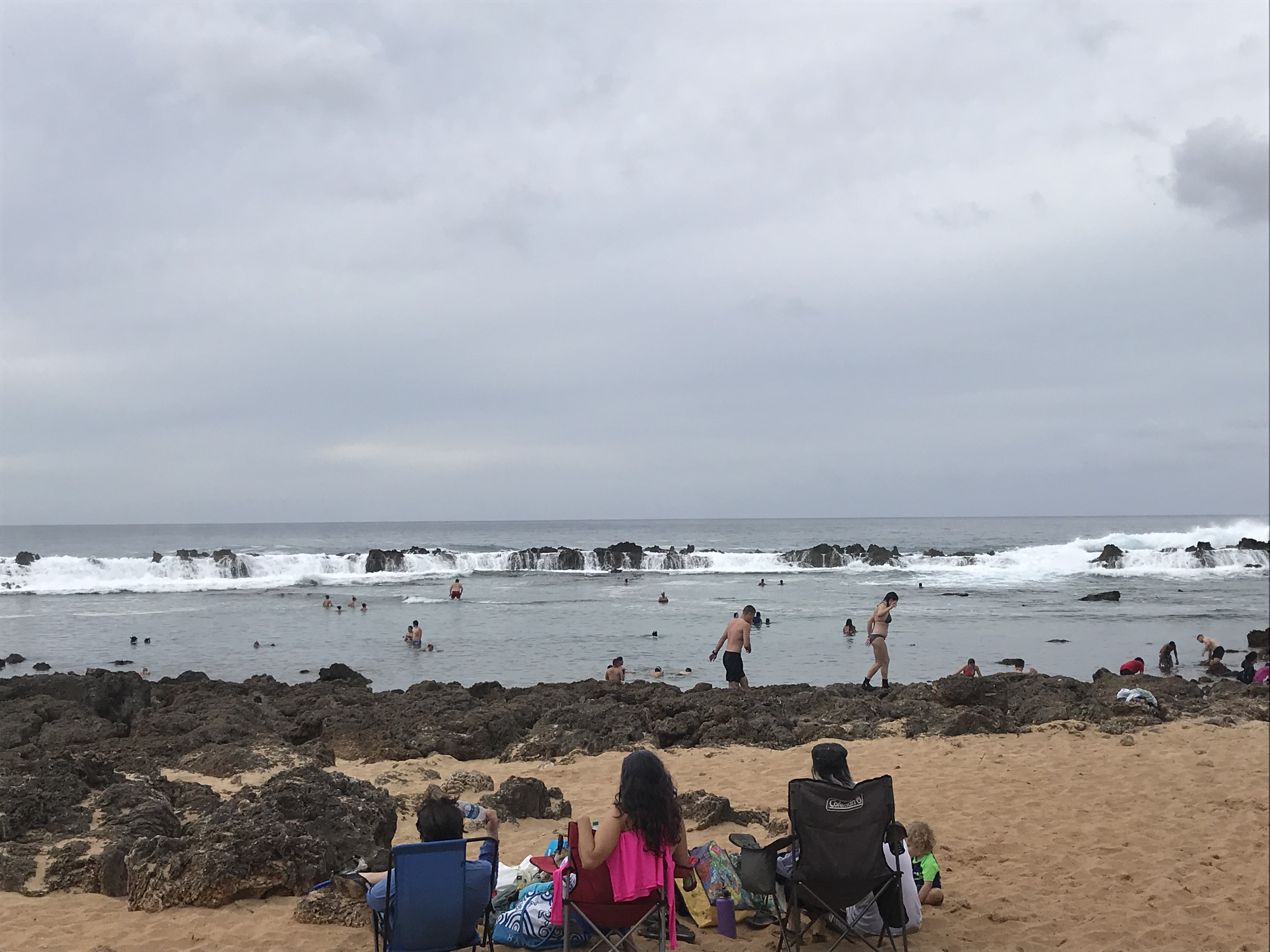 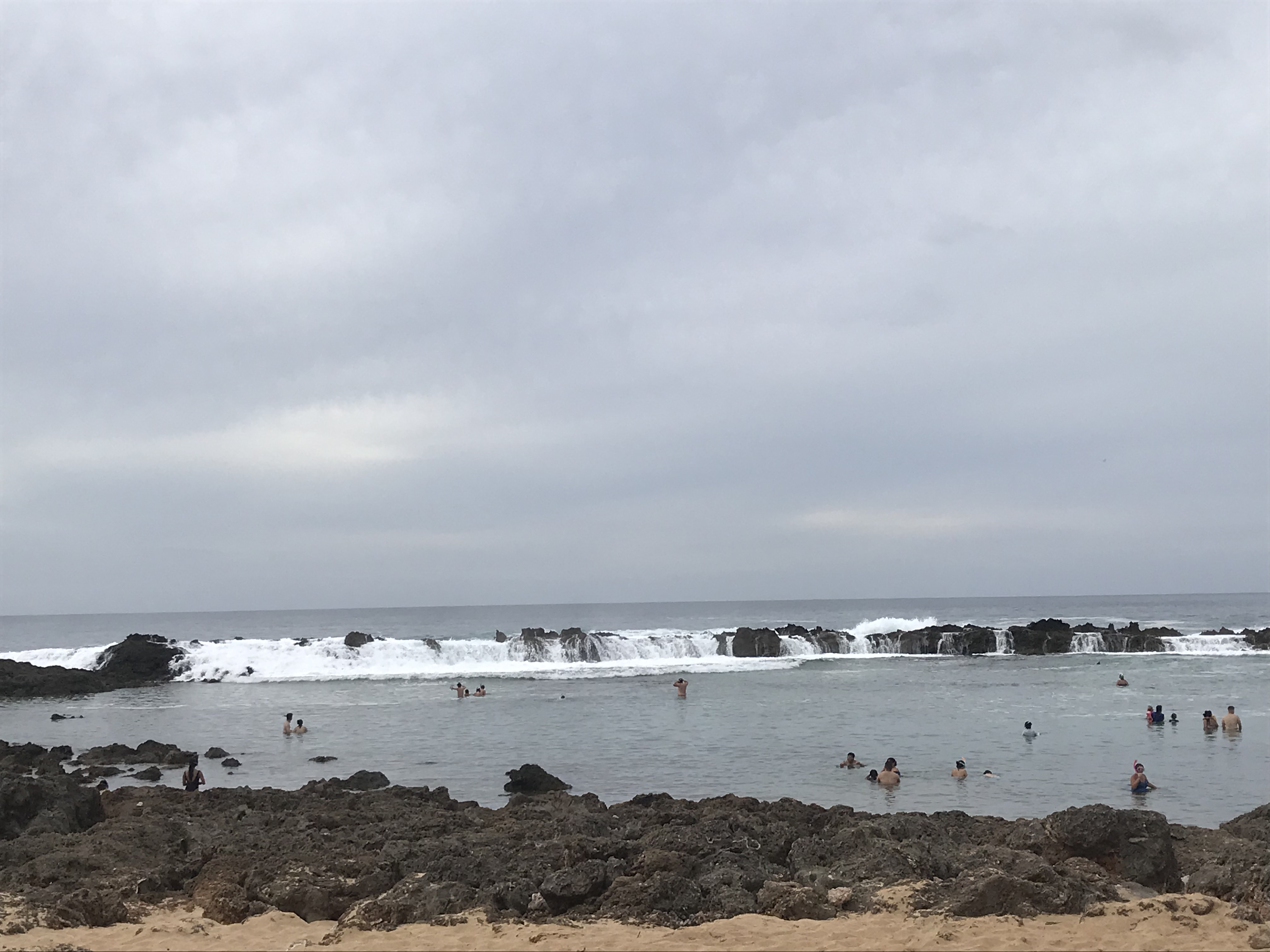 The surf was amazing and the quiet lagoon we had known a couple of days previously was now being washed over with regular large waves. Some people were idiots and walked along the top of the rocks to see the waves crashing. Surprise, surprise a guy got swept into the sea, fortunately lagoon side and goodness knows how, but he was okay.

I feel for the lifeguards when people risk theirs and others lives by complete stupidity. We had seen a rescue on another beach earlier in the day, people just underestimating this surf. People visiting especially North Shore, particularly in winter months, should respect the sea and take precautions.

We watched the sun go down, well watched until it became dark as it was so cloudy, as the waves continued to pound over the rocks at Shark Cove. Then we went for dinner in the local ‘surfers’ shacks diners close to ‘our beach’. There was a good selection of food on offer from Fish tacos, burgers, shrimps and salads. Each ‘shack’ or ‘caravan’ had an area for seating and nice lights which gave a lovely atmosphere. No alcohol was served, but you could bring your own. We had a large fresh pineapple and blue Hawaii which tasted so much better with Bacardi rum added! The local Foodland supermarket sold alcohol so it was really convenient and good value to get what you wanted and sit in these relaxed areas with a few drinks. 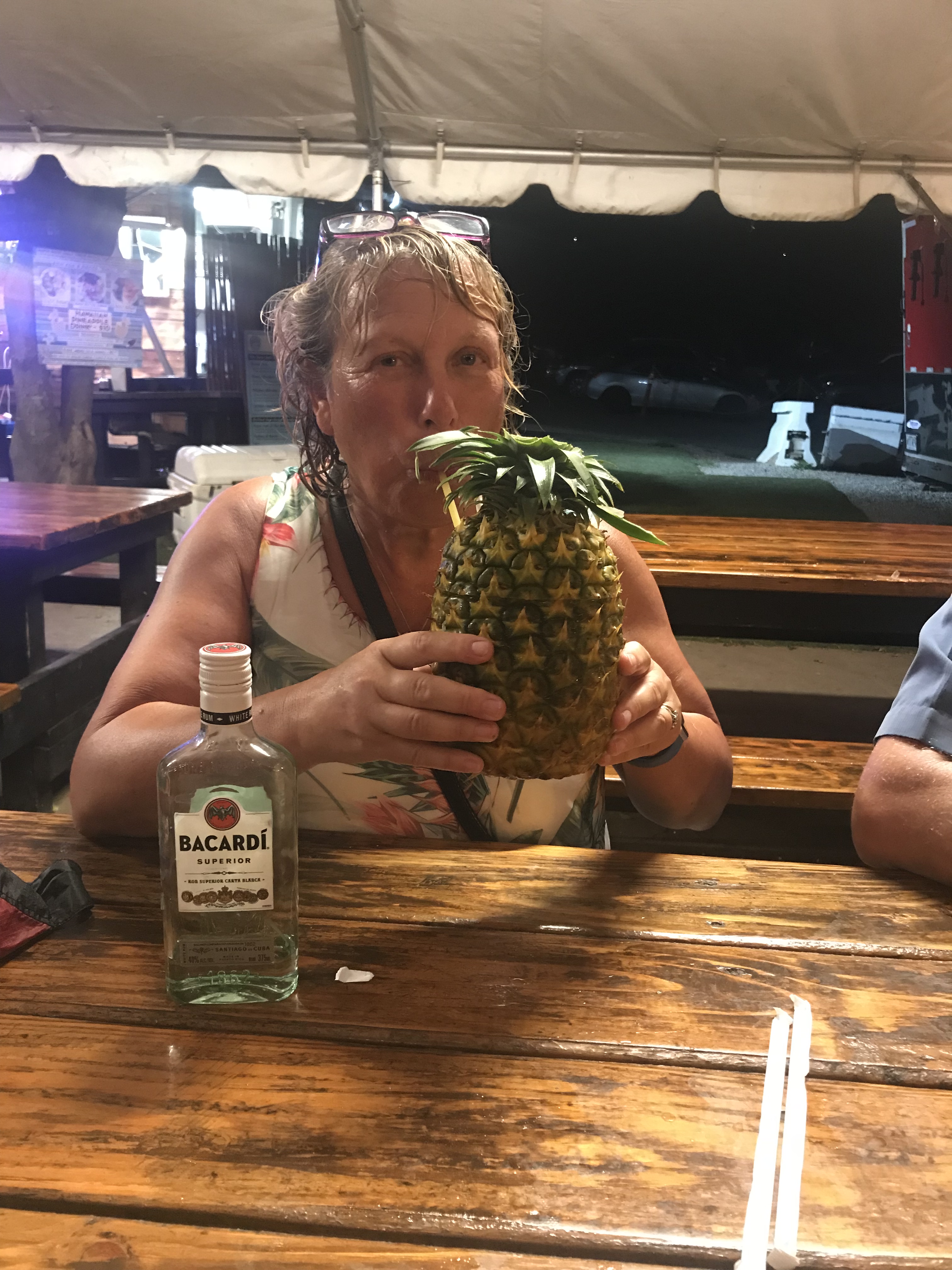 We had dinner at the burger bar which offered great food and lovely hospitality. It felt strange bringing our own bottle of wine and beers while sitting at their table, but I did like the idea.

The ‘restaurants’ close at 8:30pm and not for the first time we found ourselves the last to leave!

We made our way back to the cottage and had a final drink on our terrace. The humidity was terrible, the place is covered with so many large trees and plants it was like sitting in a greenhouse!

Tomorrow we leave for Waikiki for a couple of days and a visit to Pearl Harbour.