Having gone to bed during a heavy rainstorm, it was no surprise that we also woke up to pouring rain! Chris did a quick run round to take the covers off the windscreens and disconnect the power supply, before moving KEN to empty the grey water. We were not going to see a great sunrise this morning or have problems with sun in our eyes as we left Monesterio.

I felt guilty leaving this place, the town hall had provided free facilities in the hope and expectation that motorhome owners would spend money in their town. We would liked to have explored the town more. There is a jamon (ham) museum, the monastery, and a myriad of bars and restaurants. Unfortunately, as we wanted to say COVID safe we felt the best policy was to stay independent in KEN.  I would love to come back to Monesterio, perhaps for their jamon festival (normally in September I believe) and see what the town has to offer.

By around 9am, we set off in KEN in the rain, not expecting much visibility and hoping the rains would stop before we reached Casa Goodwin in Monda, Malaga.

We took the A66/E803 to Seville, but with poor visibility, I cannot say we had much to report on the views! We reached the outskirts of Seville and thankfully weather was improving as we drove on the bridge over the Puerto de Seville ‎⁨and the Canal de Alfonso XIII⁩. where there were a number of cargo ships docked in the port.  This historic river port, is where some of the early Spanish explorers set off in search for the New World. I love history and I so need to visit this city, but again this was not the trip for sightseeing. So we pressed on and put our next destination in the sat nav, Malaga.

The sun started to come out and for the first time, we needed to try out KEN’s air conditioning. KEN has a Dometic ceiling mounted unit ,which is powered by the leisure batteries, connected through an inverter so it works and continues to charge whilst driving.  The unit worked really well, keeping both the ‘hab’ (living area) and ‘cab’ (driving area) nice and cool.

We arrived in Malaga around 13:00 to pick up our Spanish car which we had left at the airport in a long stay car parking facility, before making our way to Casa Goodwin. 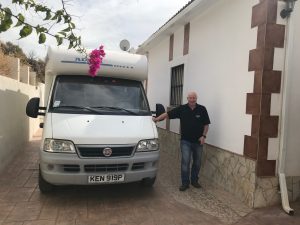 I drove the jeep and Chris followed in KEN from the airport to Monda. For those that know the roads, we decided to go from Coin via Guaro, rather than driving KEN through the narrow streets of Monda. We were left with the one nervous stretch, taking KEN down 500 metres of our campo track. But Chris is an experienced driver and we have seen many commercial vehicles come down our track, so it was no problem for Chris and KEN. We had arrived at our place in the sun.

Miles from Monesterio to Malaga =  240 miles

Driving time including a long stop picking up our car = 5.5 hours